There’s a lot of focus on eating this week, so we thought it was the perfect time to bring you this guest post from Katherine Shamraj, the founder of PVP partner organization, Sproot.
Nothing can prepare you for the challenges of feeding a preschool-aged child–not even feeding another preschool-aged child! Each child is so different, it’s hard to find any rhyme, reason or pattern to their relationship with food and eating.
Since starting Sproot, Boston’s only nutrition-focused food company for young children, I’ve learned more than I knew there was to learn about feeding this age group. Throughout this process, I’ve had an incredible resource on hand — Registered Dietician with a PhD in early childhood nutrition and a two-year-old daughter. When I am stumped, Dr. E. Whitney Evansalways has an answer that’s both practical and rooted in academic research. Because the research she shares with me looks for statistic significance instead of crowd-pleasing sound bites, her answers don’t always apply to every single child. But on average, they apply to most children most of the time.
Here are five of the biggest preschool feeding surprises I’ve learned about:
SURPRISE #1:  14 TIMES 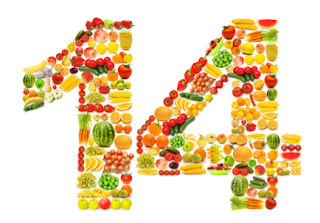 Otherwise known as:
This is how many times it takes — on AVERAGE — for a child to accept a new food if they don’t like it immediately. Some children might take 5 times, others might take 25 times. The worst thing a parent could do is think: “My child doesn’t like beans,” and stop putting beans in front of them. 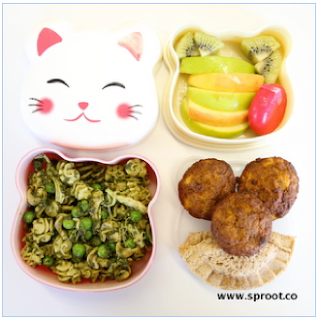 SURPRISE #2: VISUALS COUNT
There’s this thing called “sensory processing” that influences a child’s acceptance of food. Even if they don’t eat it, exposing them to food by allowing them to see, touch, and smell it increases likelihood of acceptance. So, even if that broccoli comes back uneaten, it has still served a purpose so long as it was placed in front of them. It’s very important for them to have their ENTIRE contents of the lunchbox placed in front of them at lunchtime (as opposed to allowing them to pull some things out and leave others behind).

SURPRISE #3: TASTE PREFERENCES ARE SET BEFORE AGE 4
The flavors they like by age four are the flavors they will default to for the rest of their lives. Wow! In a studythat followed the same set of children from ages two to eight, the strongest predictor of the number of foods liked at age eight years was the number of foods liked at age four years. New foods? Far more likely to be accepted between ages two to four, than between ages four and eight.
SURPRISE #4: TODAY’S MEAL, TOMORROW’S HABIT
If you eat takeout more than once a week, you’re giving your children a lifelong preference for unhealthy food. Restaurant and prepared foods are tasty. That’s their job. But they are rarely healthy. With today’s lifestyle it is difficult to avoid ordering takeout. But when you put the following two facts together, you may think twice about what to order:

1) Food preferences are set before age four (see SURPRISE #3)
2) Eating away from home has provento result in higher caloric intake and consumption of sugar and salt
It’s impractical to suggest not eating prepared foods, but consider that today’s restaurant meals will set your child’s flavor preferences to extra salty, extra sweet, extra fat for the rest of their lives. Proceed, but with caution.
SURPRISE #5: GIVE THEM SWEETS, NOT TREATS
One of the most surprising things I learned from Dr. Evans is that she recommends that if you are going to give your child a sweet anyway, it is better to give it to them alongside dinner instead of saving it for later. This surprising piece of advice may remove negotiating leverage during the day (“You won’t get your treat unless…”) but not putting sweets on a pedestal is important for a number of reasons, which Dr. Evans eloquently describes here.