Senior Director of Communications and Enrollment Jen Doyle has been sharing her pictures and experiences with James throughout his enrollment at Pine Village. Although others have been posting in this space over the past school year, she figured since she shared James’ transition INTO Pine Village (see Transition Time and A New Day), she’d also share his transition out. 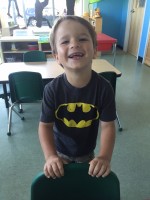 So today is James’ second-to-last day at Pine Village. I didn’t expect it to hit me hard–I mean, first of all, it’s his second to last day. And even though penultimate is one of my favorite words in the world, the whole point of it is that it’s not supposed to be the biggie. Tomorrow, maybe, when we pack up his things for the last time, when we take home all of the projects that have been piling up in his mail folder. (Which, incidentally, I can’t reach, so that’s my husband’s fault.) After all, tomorrow’s the day we actually say good-bye.

But hit me hard it did.

Because this is my second-to-last day, too. Ten years ago, when Lucy graduated from PVP, Will was coming up right behind her, so it didn’t pack quite as much of a punch. And although James wasn’t even a twinkle in our eyes (so to speak) when Will graduated, we had plans for another baby so we could still tell ourselves we’d be back–and we were. But James is it. There are no more babies in the Doyle clan, so after tomorrow, there will be no more fruta for the basket, no more water bottles in the bucket, no more change of extra clothes.

(Um, o.k. So we’re one of those families that were never quite on top of the extra clothes to begin with [my deepest apologies to Denise, Miriam, and everyone who has ever had to deal with us on this issue], so I guess there’s no big change there. Still. . .) 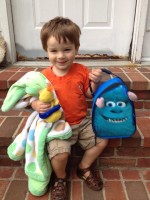 In two weeks he’ll be off to kindergarten and there will be a whole new list of things. This list will include “first”s rather than “last”s. It might even include the same extra clothes (because, well, whatever we did manage to get into that bin was probably from about this time last year and he’s a tiny kid so it would probably fit him in a pinch) and the same lunchbox (to my shame, the lunchbox he brought to his first day at PVP was the very same one I loaded in to his cubby this morning), although I’m 99% certain we’ll manage to get new fruit in there.

But that list won’t include Minnie, Lulu, Silas, Gus, Jacob, Huggers or Dariush, who were his classmates from day one. Nor will it include the other friends he’s made like Josie and Malena; like Franklin and Carter and Casey and everyone in between.

It won’t include his amazing teachers, Miriam, who loves his “When I was a baby” stories as much as I do, or Maria Ines, who has the most incredible smile, even when he isn’t quite in his listening mode.

Or his wonderful director, Denise, and her face-painting creations, her awesome hugs, and a pen and a seat at her desk for whenever he needed to do his “homework.” (To this day, none of us know where he got this compulsion to do homework, especially as no one has ever given him any. I sincerely hope this drive continues when it’s actually required.)

Since I know and equally love the school that he’ll be attending, I know that we’ll be continuing in good hands. (Rather than have the blood drain from her face when I told her about some of his preschool antics, his soon-to-be kindergarten teacher smiled brightly and said, “Oh, good! He’s going to be a great leader!” I honestly have no idea how teachers do this every day.) I’m even blessed to be working here at PVP so it’s not like I’m leaving entirely. PLUS I have every intention of sending him back for next year’s summer program. (What can I say? I am the Communications and Enrollment Director. I had to get that plug in there! Plus, it’s true!) I even have hope of reuniting with PVP friends at some point in his schooling future, as Lucy counts among her current classmates her friend, Lucas, from PVP, and Will is heading to his orientation at O’Bryant next week with Owen, his best friend throughout his time at PVP.

But, oh, how I will miss this special thing we’ve shared over the last few years.

I will miss the way Esther and Patricia and Sandra greet us with huge smiles as we walk in the door every morning. James’ hugs and “push me out the door” moment when I drop him off in the morning, and then the “Mom, can we play dance when we get home?” before he closes the door, waves at me through the window, and then runs to play with Josie and Casey. I’ll miss coming in to pick him up and having him not want to go home because he’s having too much fun with Minnie and Franklin and Gus. (Although I might not miss his response when I say that, “no, he can not run around the room and throw toys on the floor,” since that tends to be exactly what he proceeds to do.) Note, I haven’t even begun to get into anything about the science fairs, or gallery nights, or his “canal-ing” in Panama or his clay and popsicle stick rendition of the structures in the pictures of Cuba. Those are other posts for other times.

Because right now all I can think about is that I’ll desperately miss how, despite the challenges that come with having these “great leader”s in their 4-year-old form, Denise and every single teacher in this school seem to love him as much as I do.

But all good things must come to an end.

So, in the words of Denise, “paz y amor,” my friends. It has been the best of times.

4 Responses to “All Good Things…”