I’ve posted a lot here about James, my youngest, and also fairly regularly about my oldest, Lucy. Will, the middle child, hasn’t been quite as much of a presence here – and the only reason I don’t feel guilty about that is because he probably prefers it that way. But last night we had one of those moments that I know I should be really happy about it (and don’t get me wrong, there’s a big part of me that is), but that has had me crying off and on since it happened. A little background first… 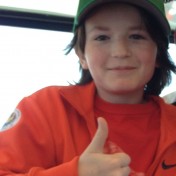 Will, unfortunately, has born the brunt of my neurotic gene pool. His first reaction to hearing about my brother-in-law’s wedding in California a few years ago was: “We need to go on a plane?” Because of course, in the world of our minds, plane = death. (Which I swear TO THIS DAY that I did not have anything to do with. Not intentionally at least.) And even more unfortunately, he’s had some fairly traumatic experiences, like, you know, having an anaphylactic shock episode on the side of an empty highway on a freezing cold November night when he was 4 year old. Being unable to breathe does something to a kid. (Not to mention that kid’s parents, but we won’t go there right now.)

He’s eleven now, and our entire extended family has noticed how much he has changed over the last year. Behavior, moods, neuroses… Pretty much everything has evened out in a way that makes a mother proud. So last night, I suppose that I should have been prepared for him to also cast aside the last of his little kid shell. But I wasn’t. Not one bit.

I don’t remember exactly when it started, but it wasn’t that long after that awful night on that freezing cold highway that “Things To Think About” became part of our bedtime ritual. We’d bring up ice for the water bottle he keeps by his bed, read from a book or two, and then I’d get up, rub his back, and run through the list. The list itself grew, starting with one or two things but ending up a fairly substantial list over time. At one point I asked him if he wanted me to take some things off the list since he’d long outgrown them, but he told me that every thing on that list made him smile a little bit because of how happy the memories were. (Oh, lord, you can imagine the tears that came to my eyes with that one.) So every night, for pretty much the last seven years, every single item was part of the recitation. It became almost a song to me, with a rhythm I will never forget even long after the words themselves are gone.

Over the last several months there have been nights where we skipped it. He’s been staying up later and by the time bed comes around it’s a quick hug (if that) and “good night” (if he remembers). And, to be honest, there were times I was grateful not to have to go through the whole routine. But then last night, when – missing it myself – I asked if he wanted me to do “things to think about.” I’m sure you’ve guessed the answer to that by now. He said, “No.”

He hesitated a moment before he said it as if he knew exactly how much meaning went into that small, oh-so-tiny word: I’m ok, Mom. I don’t need it any more. I don’t need you. And that’s a very good thing.

And I, though only barely, somehow managed to smile and nod and give a bright, “O.k. Love you, Will. Good night.” Before practically stumbling into my room and crying in my husband’s arms. Because, yes, I am so, so glad that he is o.k. That he doesn’t need it anymore. That he doesn’t need me in quite the same way. And that’s a very good thing.

But, oh, how I wasn’t ready for this. Was so not ready.

So, since I didn’t get to say it to him last night – and since there’s a chance I never again will, I leave the words here so that they can live on forever:

I love you, Will. Good night.