I am so ridiculously happy to say: this week’s blog is about books. In honor of our Authors’ Month curriculum theme, which, o.k., is now officially over, but since I wrote this on the night of April 30, I’m still within the bounds.

As you know, my hope had been to write about books last time, but there was the bombing, and then the lockdown, and books just didn’t cut it. Not when I felt like I was living in the pages of one.

The last week — thankfully, gratefully — has been much more what I hope will remain the norm. Deadlines, way too much on my plate, but nothing involving SWAT teams or CNN.

With that said, Tuesday kicked my butt. It was a beautiful day, no doubt about that – gorgeous weather, managed to get myself to the gym for the first time in, oh, maybe five years. I even voted. But overall, the day just got to me. No question.

It started out with a work thing. One of those things that shouldn’t have been a big deal but turned out to be so much more of an issue than it should have been. And that put a spin on just about everything else for the rest of the day. So I wasn’t in that great of a mood when I set off to do the round of pick-ups for the day. And what a round it was. With my husband at a class and unable to pitch in until the 8 p.m. Lucy dance pick-up, it was up to me to do the crazy drill:

As you’ll no doubt note, that doesn’t actually work. First of all, it’s impossible to be two places at once. Even those of us who are horrible at math know that the 6:30 p.m. Brighton/Watertown split is tough. Second, fitting in dinner for three kids — 2, 10, and 13 — isn’t exactly the easiest given the schedule above. (And, yes, I know that making sandwiches for everyone would have been ideal, but see previous paragraph about work. I barely managed to get out of the house to get to Will at 4:30. Sandwiches weren’t making it into today’s game plan.) And, third, the schedule left no room for error. So when, say, Will wasn’t ready right at 4:30, and then needed to run back into the school, and then said we’ll meet out in front but didn’t see the car so he ended up not showing up, well, it just served as a continuation of the workday. Which did not bode well.

Needless to say, we were late picking up James. And then late picking up Lucy. We somehow managed to get Lucy to cello on time, but by then Will was angry with me because I’d clarified that when he began the ride by saying he had no homework to do, it actually meant he had no homework due on Wednesday. Having an entire vocabulary packet due on Thursday and a Social Studies project due on Friday, however, meant that Wednesday night would be well spoken for, so no more games on the iPhone, homework folder out instead.

Did I mention that Will gets surly when he doesn’t eat?

O.k. New plan: call the Watertown Domino’s and order pizza for pick-up. Done. (No judgment, please.) Lucy dropped off, pizza picked up, back at the house with a whole twenty minutes for Will and James to eat their pizza. And, thank goodness, they got the “light sauce” right on Will’s pepperoni. Ten whole minutes of peace. I could even get James into the car so that we could be ready to go when Dan (Will’s guitar teacher and all-around wonderful friend of the family) showed up. But I neglected to factor in James’s 6:22 pm poop.

I managed to finally convince him that I could change his diaper before he was fully done with his twenty-minute cycle of pooping — also managed to get Will to not draw the line in the sand right then about whose cars were whose — and get him outside at 6:30. What I didn’t manage was to convey to Will that he could not then finish his homework before starting his guitar lesson, so that was another seven minutes. Finally rolled up to Lucy’s cello lesson at 6:47. Sigh again.

McDonald’s drive-thru for her (please hold off your judgment for just a little bit longer), and, then, finally, got her to dance class. 7:04 p.m. Not great, but could have been worse.

Driving home along the Charles, I was not in the best mood. James helped with his running commentary. (“Boats, Mommy! They are swimming!!!!”) But, oh, how I was ready to be home and done with the craziness. Which was when I let my guard down.

We got home just as the lesson was ending and, having the chance to talk to another adult, I ignored the raucous laughter in the living room that I knew meant Will and James were playing a game that they should not be playing, and instead decided to hang out and chat with Dan. Less than ten minutes later came the kind of crying that I knew meant blood was involved. And, yes, there was James lying on the floor, his temple bleeding from where he’d fallen off the couch pillow (or, rather, been hit by a pillow wielded by Will and pushed off — yes, o.k., some judgment here is appropriate) and hit a stack of Legos on his way down. It was not a good moment. And yet, I guess, the kind of end I expected to this incredibly aggravating day. I managed to clean it off, get the Neosporin on (my husband laughs, but I can’t rest until I get the Neosporin on), and then the Elmo band-aid.

Yes. And here goes: while James was nearly inconsolable, crying in pain, the only thing that calmed him down was sitting back in our “bink” chair, binky in his mouth (sorry, no judgment allowed again), and a stack of his favorite books. And I, unsure how to determine whether a two-year-old has a concussion or not, took comfort in his knowing exactly what books he wanted. First up, the “sheep” book. In this case, he didn’t mean Sheep in a Jeep (one of my personal favorites) or Sheep on a Ship (both by Nancy Shaw), but Lucy the Lamb. So, o.k., technically not about sheep, but the lamb was close enough.

Then came Oh My Oh My Oh Dinosaurs! Now, of the Sandra Boynton books — many of which are translated into Spanish, incidentally — I have to admit, my favorite Boynton books are But Not the Hippopotamus and Hippos Go Berserk. But, honestly, I have no issue with dinosaurs. And what I was happy about Tuesday night was that, despite the big bump on his head, James went through all the usual motions: his routine counting of the dinosaurs on the last page (he can’t actually count, mind you, but he was close enough), pointing out which dinosaurs are green, etc. 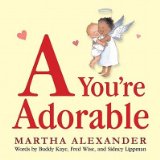 The last book of the night was my choice: A You’re Adorable (Martha Alexander). It’s a song that my mom used to sing to me, so when I came upon the board book way back when Lucy was a baby, I couldn’t help but snatch it up. And I’m so glad that James loves it. He sings along throughout the whole alphabet, except he has to stop at “M-N-O-P” because of the girl with the puppy, and then at “Q-R-S-T” because he has to talk about how the boy on the bicycle is pulling the train.

And there it was. These days I don’t get a lot of time to read books of my own; I figure that time will come again. But I’m thrilled that sitting down in that chair and reading a few books made as much of a difference to James as it did to me. Those moments and those three books put the rest of the day into perspective. If I could end every day holding him in my arms, his cheek to my cheek, working our way through the stacks of books on the table beside us… It’s worlds away from where the day began — hearing him giggle his way through the alphabet was a good thing. A great thing. So thank you, Authors’ Month, for reminding me to fully appreciate the joy and comfort that even just a few words per page can bring.

Of course, I should end by noting that, unlike me, my husband didn’t rely on general behavior to test for a concussion. “Did you ask him who the President was?” he asked, only half jokingly.

“He’s two,” I answered. “Of course he doesn’t know who the President is.” (Although at two Lucy could name the three Buffy boyfriends, to my mother’s deep dismay.)

“Well, let’s try him,” Kelley said, as we stood there by the crib. He turned to James, looking at him expectantly. “So?”

After looking at Kelley, and then at me, James put his binky back in his mouth. “Obama.”

4 Responses to “Books and My (Sweet Baby) James”