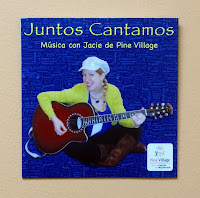 This week PVP Education Director Jacie Feinberg unveils her first Spanish-language CD with songs written for the toddler/preschool set. There will actually be several launch parties, the first being tomorrow (Friday, 3/8) at PVP Newton (1326 Washington Street, West Newton) at 10:00 a.m. Bring your kids/family/friends for the sing-along; everyone who attends gets a free CD.

Music has been a part of Jacie Feinberg’s life since she was a little girl. She played piano for nine years and took several guitar lessons when she was in seventh grade. Although she and her teacher’s style didn’t quite mesh, she was determined and ended up teaching herself to play guitar. She’s been doing covers and writing original songs ever since. She stopped playing guitar in high school, but picked it up again when she began working in early education in 1998 and incorporated music into her circle times.

“I think it’s a wonderful way to bring music to life,” she says. “Having the guitar was such a great way to travel and visit other schools.” It gave her the chance to bring music to as many kids as she possibly could.

With a background in Spanish education (Jacie started taking Spanish as a seventh grader and has always felt a connection to the language and culture), she started out thinking that she’d be working in the 7th-12th grade range. But in college, as soon as she began a job with a family childcare, she knew that she wanted to focus on the early education piece. She hasn’t looked back.

When Jacie joined Pine Village, she started doing weekly music classes in her own school (after a year of being a Pre-K teacher, she became Director of PVP Newton in 2008). Then she branched out and brought her music to other Pine Village schools. After having twin girls, Jacie returned in December 2011 to become Pine Village’s first Education Director. The new position showed the growth not just of Jacie, but of Pine Village as well. With eight schools now making up the Pine Village family, part of Jacie’s job has been to help unify and systemize the curriculum amongst all of the locations by creating unified templates and ways of presenting the curriculum to all of the PVP families.

She distributes curriculum ideas to all of the staff on a monthly basis as inspiration. And each week, she sends out her “Ideas de Inspiracion” in an internal blog to the teachers that documents what’s going on in all of the schools. Topics range from bulletin board design to pictures of each school’s dramatic play areas to ideas on how to document each child’s progress. The overall common factor, though, is that these tools allow Pine Village to really tap into the wealth of resources from all of the teachers in all of the schools. Jacie also provides curricular support, training for new teachers, and, basically, whatever other support she can provide so that teachers can be at their best every single day.

It’s been a longtime dream of Jacie’s to compile the songs she’s used in her classes and have a CD as another home/school connector. As she visits all the schools, parents often say to her, ‘I want to know the songs. How do I sing these at home?’ The CD provides a way for the kids to relate to the language and listen in their cars, but it also allows the parents to learn along with their children.

Although this was part of the reason behind the development of the CD, Jacie has seen the evidence of this firsthand with her own kids. “Ever since I received the CD,” she says, “I’ve listened to it to and from the school every day – because my girls ask for it on the hour commute. They get so excited. Because they listen to it every day, and the songs are so repetitive – which is how they’re designed – they anticipate the songs, they know what’s next in the order, they repeat the phrases over and over again. And they’re 19 months. I see the benefit in the way they are beginning to communicate.”

And for those of us who aren’t native Spanish speakers? Jacie’s mother doesn’t speak Spanish at all but through the CD she’s picking up phrases and connecting with her granddaughters on that level as well.

The CD has a mix of traditional and original songs – out of a total of thirteen songs, eleven are original. When it comes to her own inspiration, the world is Jacie’s oyster, so to speak. “I have a song about a fish who doesn’t know how to swim,” Jacie says. “Adding that element of silliness to a song makes it memorable for the children. Imagining a fish that doesn’t know how to swim, but it knows how to fly, run, jump, sleep, read…”

Jacie wants to get the kids moving, and she likes to use props so that the kids have hands-on experiences. “With the language learning, I feel there’s a total physical response (TPR in language-learning circles). The children are associating movements and actions with the words in the songs; it helps them to memorize, to internalize the songs, to start to reproduce and communicate and sing along. The song called “En Mis Botas” is about jumping in different colored boots. As the kids jump along, they sing along.” Using catchy melodies allows children of all ages to be able to connect with the language.

Doing the music is just a component of Jacie’s job, but it keeps her connected to the kids and teachers, and, as she says, it fills up her “metaphorical cup of happiness.” Getting into the schools, connecting with the kids, having them call her name when she walks in because they’re so excited… It’s what teaching is all about.

For Jacie, the ability to combine her love of the language of music and of working with young kids has been a dream come true. “I love Pine Village,” she says. “I love working for Pine Village. Just to be able to send my girls to such an amazing program – to be able to give my kids the exposure to a foreign language and another culture – is such a gift. I see the results already within my own children.”

If you can’t make it to this week’s Launch Party, join us in April (4/6/13, 10:00 a.m.; Pine Village South End) or July (7/2/13, noon; part of the Kendall Square Corporation’s FREE Summer Concert Series, 300 Athenaeum Street) instead. Or come to all three!
All events are free and open to the public.