Lucy, Will, and James 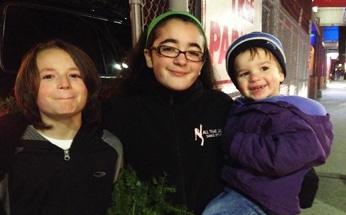 What I love is the ability the Pine Village teachers have had to foster a love for learning.

The joke in the family is that, upon learning they were pregnant with their third, the first call they made was to Pine Village: “We’re going to be a Pine Village family again!”

The joke in the Doyle family is that, upon learning they were pregnant with their third child, the first non-family phone call they made was to Pine Village Co-Founder Brid Martin exclaiming “We’re going to be a Pine Village family again!” Their older children, Lucy (13) and Will (11), attended Pine Village and parents Jen* and Kelley still attribute their older children’s academic success to experiences from a decade ago. “What I have loved since day one,” Jen says, “is the ability the Pine Village teachers have had to instill a foundation for what is to come, while also establishing and fostering a love for learning. Although it may not at first glance seem ‘rigorous’, I have found that the approach is incredibly long-lasting.”

“But more importantly,” Jen says, “this was done in a way that does not produce unnecessary stress for children at this age. My children came out of Pine Village with a love of reading, examining, questioning, and a joy for learning. They also came out of the program with a strong sense of self, deep respect for others, an awareness of other cultures, and an understanding of how to interact with peers in a caring and tolerant way – not to mention a second language,” thanks to the Spanish immersion aspect of the school. They are now seeing the results of what began at Pine Village through Lucy’s studies at Boston Latin School and Will’s experience in the Boston Public Schools Advanced Work program.

Their youngest child, James, now three and halfway through his first year at the school, sings to himself in Spanish, writes his name (“O.k.,” Jen says, “so only he knows that it’s his name, but still…”), and argues with his older brother about the correct pronunciations as he counts to ten in a language that he now knows better than his parents. “All of this is done with an overall feeling of love, happiness and joy that makes going to school every day a pleasure rather than an obligation.”

*Full disclosure: Jen Doyle began as Pine Village’s Senior Director of Communications and Enrollment in July 2013. She decided that she wanted to get to go to Pine Village every day, too.